The vivid effect of the Guangzhou Tower's brilliance comes from more than 6000 sets of LED lighting equipment from Philips. Among them, LED ColorReach Powercore high-power color dynamic floodlights, is the first product that can truly show the faÃ§ade or space structure of a giant building. The 28-storey projecting distance can help the building to open up the extraordinary connotation. Dynaflood LED professional dynamic floodlights emphasize the use of color to highlight the building structure. The perfect cooperation between the two finally realized the epoch-making application of Guangzhou Tower's large-scale LED floodlighting. At the same time, due to the energy-saving characteristics of LEDs, the overall lighting energy consumption of the building is only 500 kilowatts, which greatly improves the operational efficiency. 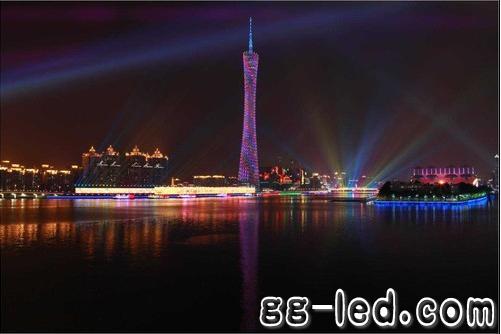 The outer tower steel structure of the Guangzhou Tower consisting of 24 tapered steel columns will be light gray, 46 rings will be medium gray, and the innermost concrete core tube will be dark gray; the tower body light will be composed of 1080 node LED lights. Through the computer control circuit, various changes in video advertising effects can be produced. At the top of the tower, there will be three laser light beams with a range of more than 1000 meters, pointing to the Guangzhou Twin Towers and CITIC Plaza in Zhujiang New Town. The antenna masts are controlled by time-controlled circuits and can be locked in different colors every day.

Smart meter is one of the basic equipments for data acquisition of smart grid (especially smart distribution network). It undertakes the task of collecting, measuring and transmitting raw energy data, and is the basis for information integration, analysis optimization and information presentation. In addition to the metering function of the basic power consumption of the traditional electric energy meter, the smart meter has two-way multi-rate metering function, user-side control function, and two-way data communication in various data transmission modes in order to adapt to the use of the smart grid and new energy. Intelligent functions such as function and anti-stealing function